When we say a complex system, we mean that there is so much information in this system that the usual models derived from reductionism, do not work perfectly. Typically, different models are presented to describe these systems depending on their scale, which predicts the behavior of this system at that scale. Social networks are also known as complex systems, which means that the models presented in this branch can not fully explain the real social systems. However, scientists working in this field have not given up trying to better understand these systems and are trying to build and improve their cognitive methods.

One of the most widely used and reliable methods in physics is statistical mechanics, which scientists have used in the last two decades to identify social networks. The equilibrium approach of this method requires an energy function, cost function, or Hamiltonian to provide large-scale predictions. (For a better explanation, you can refer to the following articles) The best Hamiltonian used in this section was provided by Heider in the fifties. This model shows the interaction between three people with friendship and enmity and explains how the relationship between two people can be affected by the third person. In physics models, the Heider balance theory is considered as a triple interaction.

Now, what is Heider balance theory? It is very simple. Consider three people who know each other. If two of these three are friends with each other and one of them is an enemy with the third, these three are in a tense social relationship or imbalanced triad (based on social literature). Because a friend expects his/her friend to cut social ties with his enemy to become a balanced triad. This definition is based on the familiar idea that a friend of my friend is my friend as well, [+ + +], and an enemy of my enemy is my friend, [+ − −]. However, in the case of imbalanced triads either there are three enemies interacting, [− − −], or I have two friends that are enemies, [+ − +] (+ sign is for friendly and – is for unfriendly relationships). 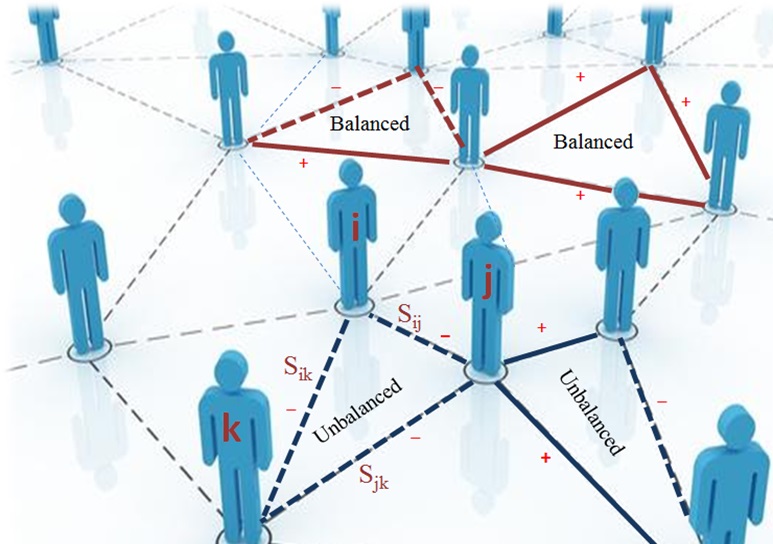 In this group, with equilibrium and non-equilibrium methods of statistical mechanics, we have studied the social models presented in this regard.